I did it again.  I took a leap.  I made a crazy decision.  I made a decision based on a dream of a video.

If you’re anything like me, you know this movie.  Not only know it, but have watched it (maybe more than once!). Not only watched it, but absolutely LOVE it!

I love it, not only for its overall awesomeness, but for each specific part…costumes, choreography, videography, the actors (😀)….the list goes on!

Yes, I’m referring to the greatest musical of all time (at least in my opinion)…”The Greatest Showman“, starring Hugh Jackman, Michelle Williams, Zac Efron, Zendaya, and many more!

For as long as I can remember, as my parents anniversary rolls around, my siblings and I have created a special dinner, themed to a specific country.  A couple years ago, we realized that we had run out of the various “groups” of countries.  We didn’t have a country to theme the dinner too…thus, we decided to decorate based on a favorite show.  Then came a spur of the moment idea to create a lip-sync video of the shows theme song. It was a hit.  It become tradition.

With “The Greatest Showman” soundtrack playing constantly, wether in our heads or on our speakers, it wasn’t too hard to decide what the theme would be!

Next, we had decide which song to sing too…that one wasn’t too hard either. Everyone is raving about “This is Me”, now don’t get me wrong, it’s great song, but I believe there’s a song that gets overlooked…the song is…”A Million Dreams”!

I’m in love with the whole “A Million Dreams” scene.

I love the way it perfectly describes the expectations that children have…the expectations of those who are falling in love.  Real world eventually hits, but that’s what so spectacular about the story of the Greatest Showman, even with “real world”, the dreams become reality, and together, husband and wife, they work through the struggles!

Oops, I forgot this is a sewing blog. I better start taking about costumes!

So, once we decided on the song (and we made a crazy decision of actually singing, like with our real voices…😮🤭), I started researching the costumes.  At first I was only planning to recreate Charity’s pink dress, which is her most popular dress, but after looking into her other outfit (the one that she wears for traveling/dancing near the railway), I fell in love.

Everyone thought I was crazy, I even did!

In my next post I’ll discuss the making of the traveling outfit…for now I’ll just explain the pink dress.

Now that you’ve heard the whole background story, here the finished video.  Did the signing turn out?!  Let me know in the comments!

Thanks to my awesome brother, both for the videography and being my Hugh Jackman!

~ Onto the the Costumes ~

Deciding on layers of chiffon for the dress wasn’t too hard!  The flow of the dress is lovely; chiffon just sounded right!

Based on the picture below, I decided to use a charmeuse fabric (in a slightly lighter pink) for the lining.

I layered the skirt with 3 layers of chiffon and 1 layer of charmeuse.

If you need help with the shirring technique, here’s a great article.

(I must admit, I needed some help with shirring…so I googled and found what I needed!)

A unique detail of this dress is show in the next two photos…do you see it?

If you caught it, you noticed the the “band” of lighter pink edging on the bodice neckline/v-neck.

I decided to use pink ribbon for this edging.

Now that your bodice is prepped, move onto the sleeves!

Detail pictures below.  Look at the wrist smocking/shirring on both pictures.

Compared to what you see when Charity wears the dress, the smocking/shirring must be covered up quite a bit!

The sleeves are attached, the bodice is attached, and I’ve placed the cream “cover-up” in the v-neck.

I have a zipper on the right side (you can see the opening in the picture below)!

These lovely photos are by Smile For Sophie Photography!

Thanks for looking and learning with me! ~ Bella Mae 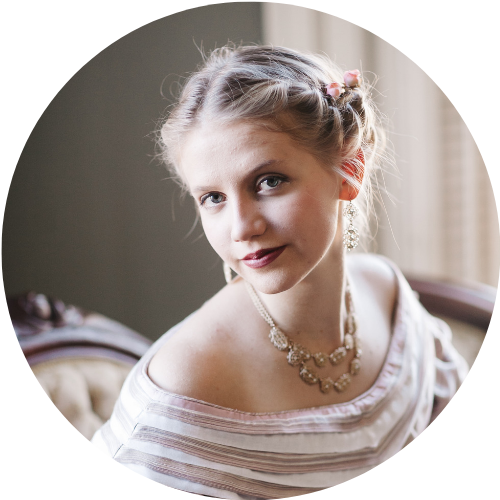 I'm a seamstress. I'm a blogger. I'm a perfectionist.I’m a gal who loves clothing design and sewing.  So I’ve added the two together to create the gowns and costumes you see here on this blog and on my Etsy shop. Read on...

Visit me on Etsy!

I filmed this video in November, and I finally got it edited and posted on YouTube! • It’s 25 mins dedicated to the construction and assembly of Belle’s Bodice! I also share my fabric link....I’ve never shared it before, so go find it! 😉 • Link in profile, or visit my story for a direct link.
It’s finished! I’m so very happy with the result! First time working with insertion lace. Plus, it’s been my very first chemise! • Part one, of step one, is complete! (Step one being the undergarments...now I need to make drawers and a corset!) • Follow this hashtag to get all the updates on this project: #BellaMaesPhantomProject
When filming, things get a little awkward! • Don’t you love my “stand”? 😂 But it gets the job done!
Let’s start from the very beginning, a very good place to start... 🎶 #soundofmusic Even though that’s sung about singing, it’s also very true for sewing! • Step one for the Phantom project: Undergarments! • I’ve already begun the process with the making of a chemise! It’s actually my very first chemise...yup, you read that right! I’ve never made a chemise! • And as per my regular self, I designed my own pattern, added some extra details, and spent way too much time on it! 😏 Finished photos coming soon. • #chemise #victorian #victorianera #laceinsertion #lace #victorianunderwear #cottonlace #phantomoftheopera2004 #masqueradegown #christinedaae #phantomoftheopera #bustledress #latevictorian #seamstressesofinstagram #victorianfashion #flatfelledseams #handsewing #handsewn #sewingproject #sewing
I’m currently writing my first eBook! • Learn 6 ways to hem a circle cut skirt! Releasing on January 31st. But you can pre-order it NOW! 🎉 Because it’s my first one, it’s only $5! • Link in profile, or visit my story for a direct link!
Coming this Spring! • The supplies have been gathered, the undergarments are being made, and it’s finally time to replicate this gorgeous dress from the Phantom of the Opera! • (Christine wears this dress during the masquerade ball.)
%d bloggers like this:
%d bloggers like this: