For some reason I decided to make a petticoat with all circle skirts…Why? I don’t know! They’re absolutely my least favorite thing to hem, and in general, to work with!

You know, it makes sense when you think about the mathematics involved.  Even if it’s only a 1/8″ hem, the circumference is larger on the edge then it is a 1/4″ inch in from the edge.  This is where the stitches need to be sewn. In order for the hem to be flat and lay nicely, the measurements of edge and the stitch line must be the same…impossible? Maybe, if mathematics are involved. 😉

Fortunately for us seamstresses, there’s a element involved with sewing that will never be accepted into the mathematic field… MANIPULATION!  Oh, ya!  We know how to manipulate!  Well, I should probably add “fabric” to the end of that sentence… outsiders might think we’re actually manipulators; the kind that use people and mess with them… :/

Alright, I think you get the idea…

Let’s do some FABRIC manipulation with the help of a steamy iron, a piece of card stock, and a little water!

First of all, cut your piece of card stock with a curve similar to your circle skirt. Let’s call this the template.

I’m doing a 1/4″ hem so I align my template about a 1/4″ from the edge.  Now, using your fingers, roll the fabric over the cardboard.  DO NOT STRETCH THE FABRIC EDGEWISE.  Fold it directly onto the template. It will be a little loose.  Now use the iron with a perpendicular (to the edge) motion.  Don’t slide the iron parallel to the edge; this is another way to stretch it in the wrong direction.

The result?  Your using the heat of the iron to “shrink” the extra fabric to match the smaller circumference.  The reason for the template is to keep the wrong parts of the fabric from stretching or shrinking. The template’s telling the fabric to go exactly where it needs to go and keeps it from moving the other areas of material out of place. 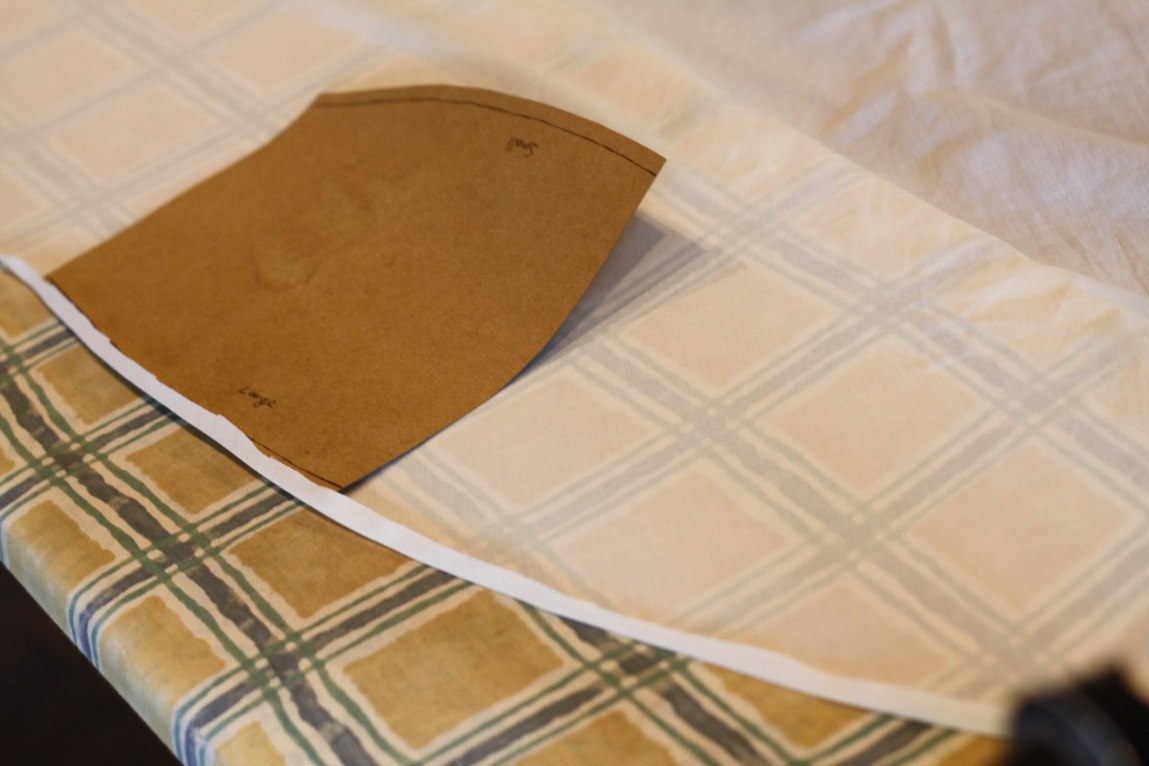 One other thing; you are NOT making little tucks.  You’re simply letting the heat mold it into the shape of the template.

And now repeat with the second fold.  Again, let the heat (and pressure) do the work. NO TUCKS! 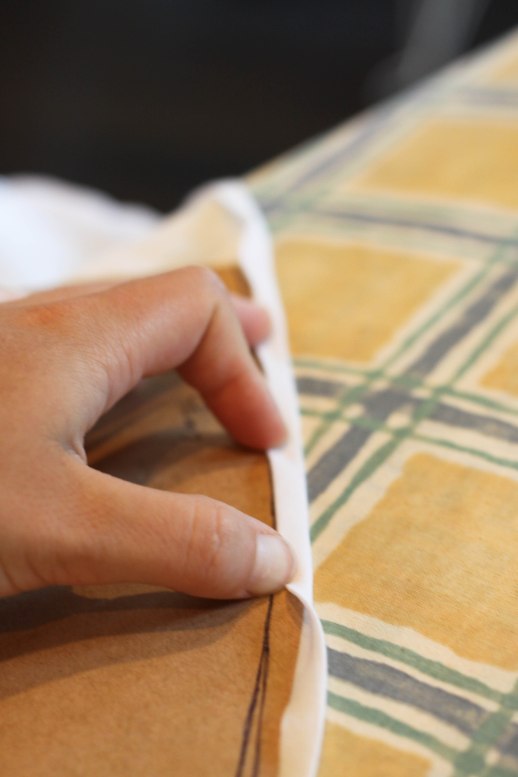 As you can see, there’s still some “looseness” to the hem. It’s not completely gone…at least, not yet! 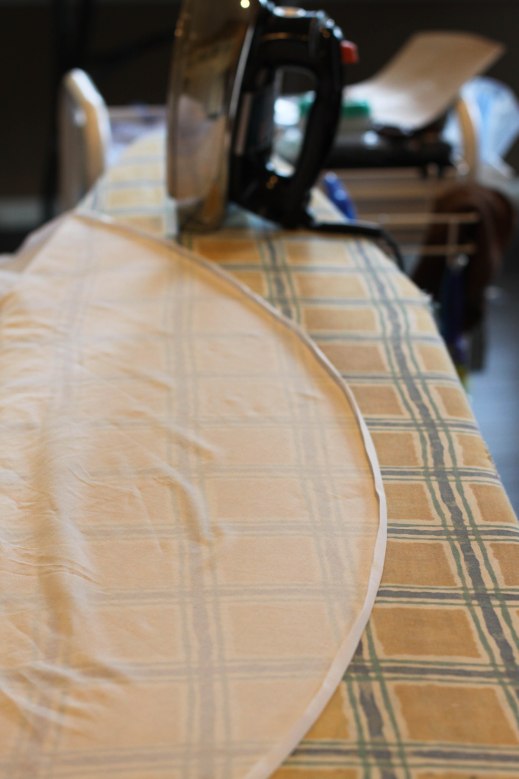 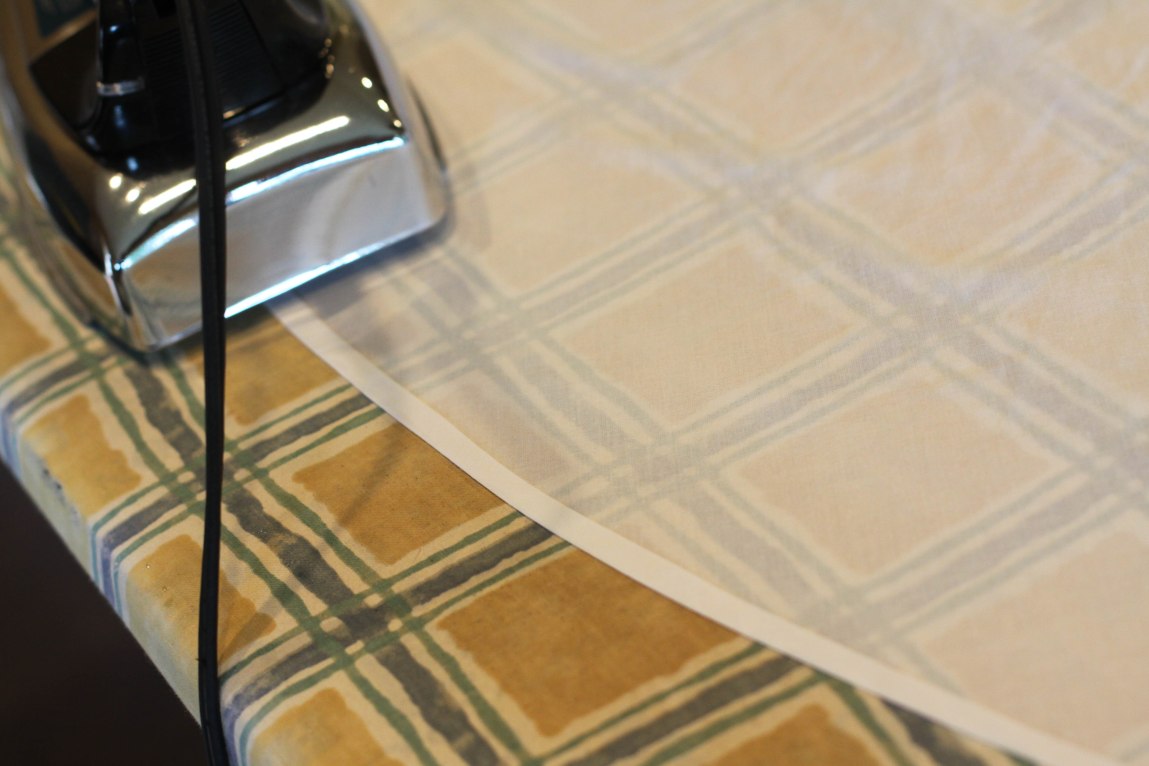 And would you look at that?! It’s aligned up. The “looseness” is gone. It has no tucks. And it’s flat!

We’ve now gone all the way around. I haven’t snuck in any tucks…and look! There’s no extra fabric! 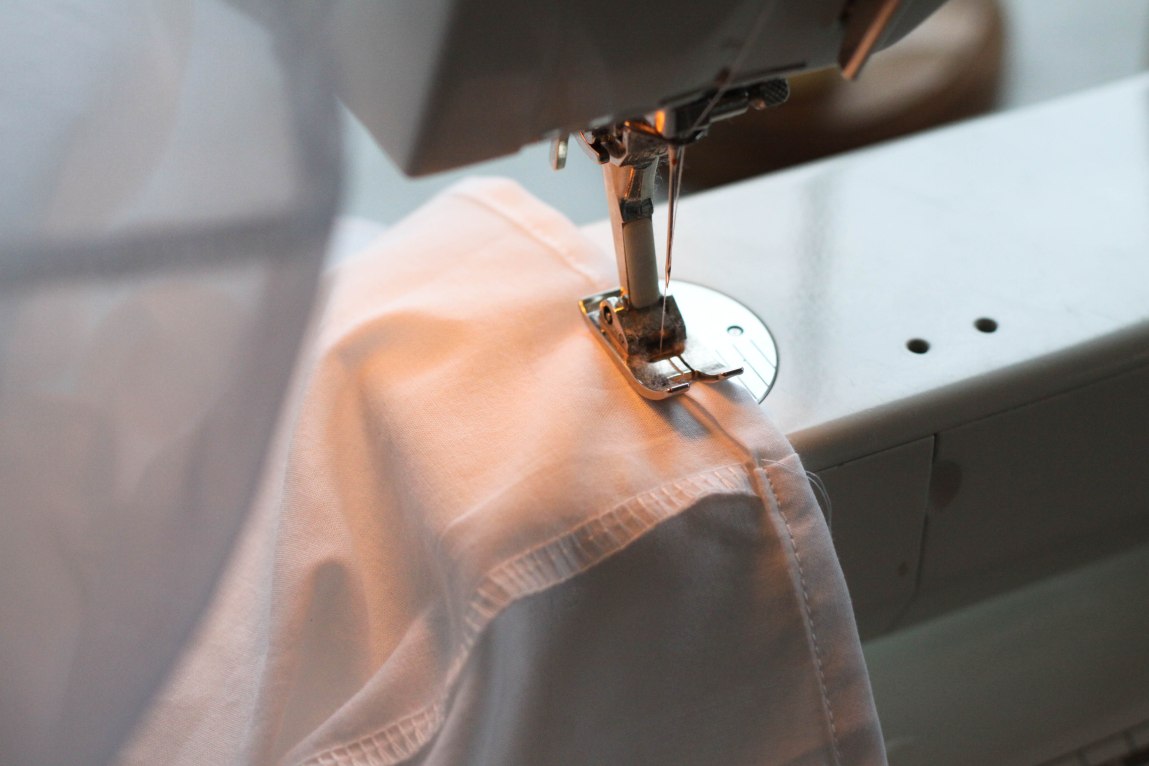 Give it one more nice pressing! 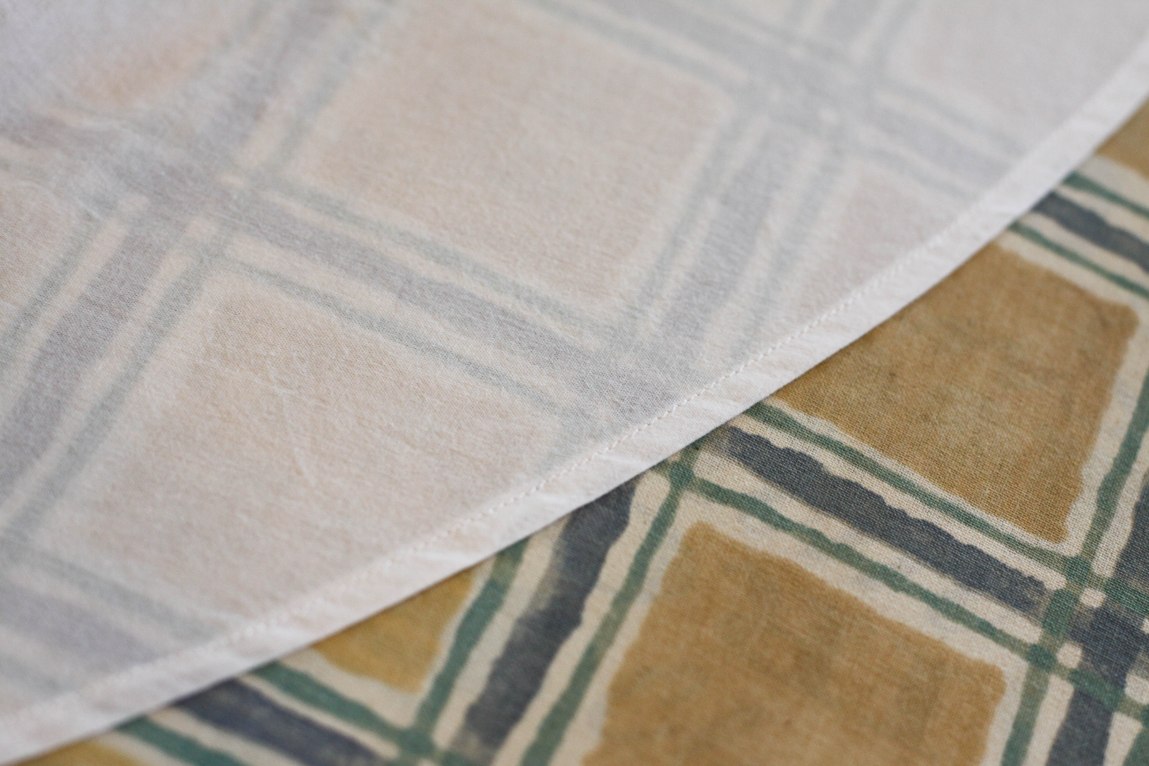 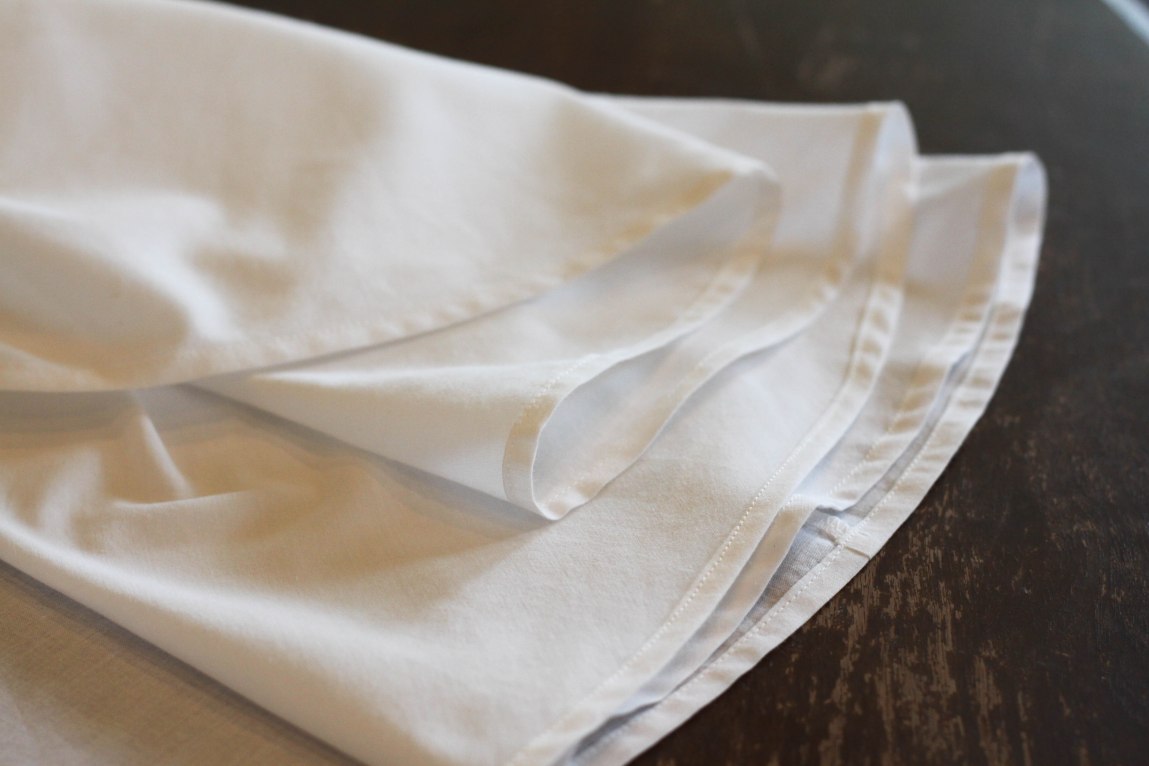 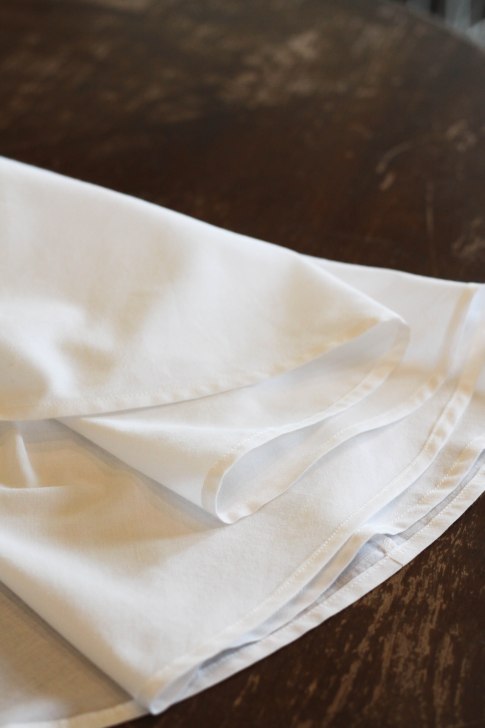 Now, I want to mention; not all fabrics will work the same…you will run into a fabric that won’t be able to do this manipulation.  Also, you’ll get to a point where the curve of the circle skirt is just too tight and this method won’t work.

For part of the petticoat, which I mentioned at the beginning,  I added a lower flounce.  The curves of these flounces were just too tight and the method didn’t work.  Also, the fabric was organza.  I believe this was also the issue.  So, I decided to try a different method.  This may not work for the look your trying to achieve, but for a petticoat, I was happy to make it easier!

I folded a 3″ piece of organza in half and ironed it.  I cut this piece on the straight of grain.  Looking back, I would recommend cutting it on the bias.

I then used my serger to attach the strip to the edge of the circle flounce.

I then gave it a nice pressing and ta-da!

Would you look those hems! 😛 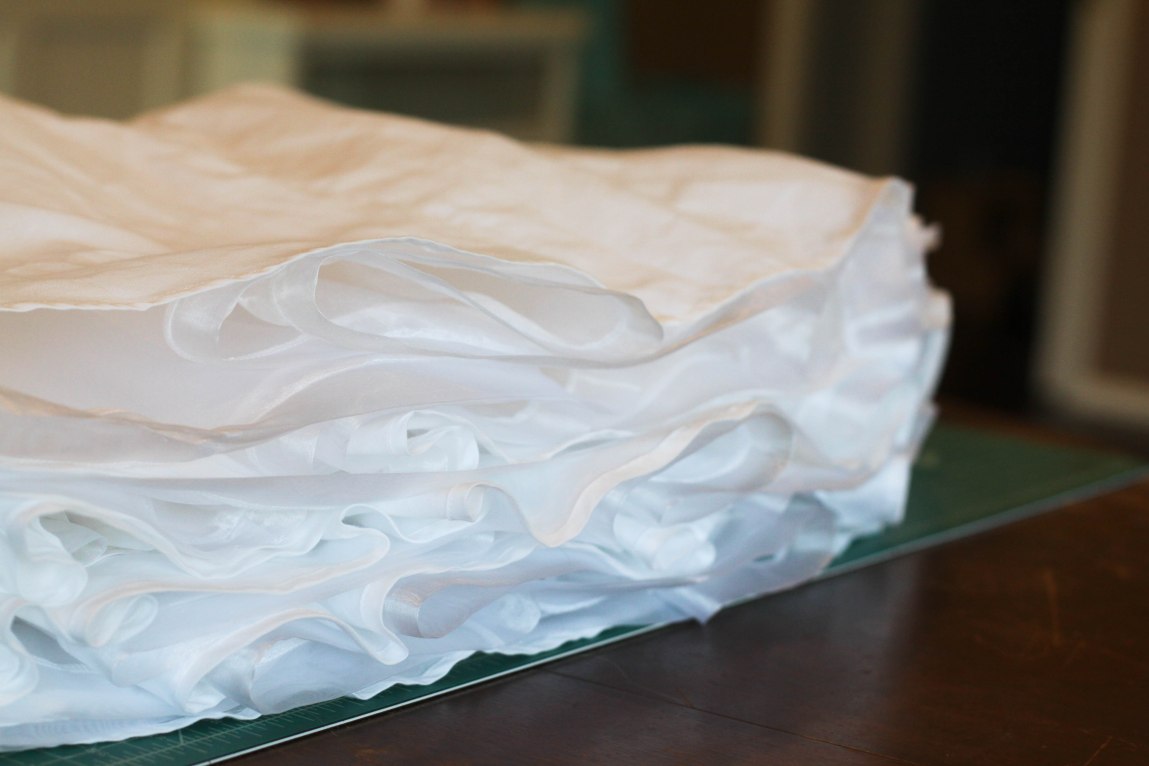 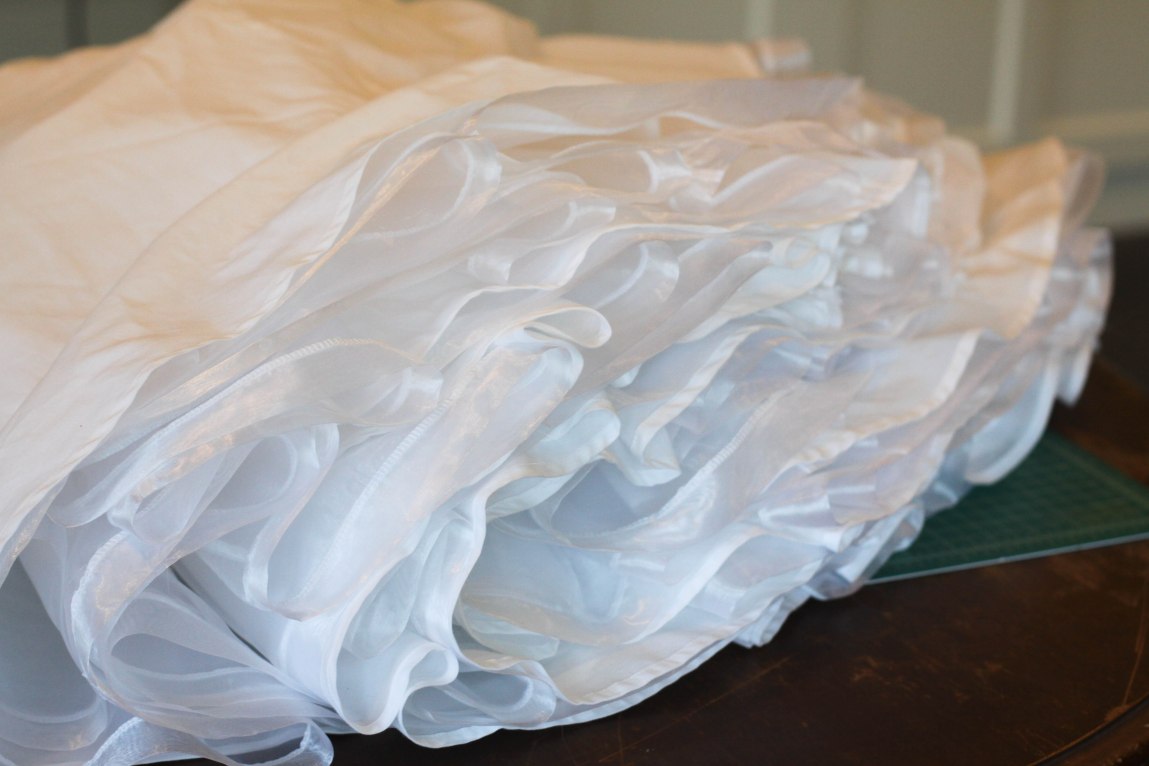 Thanks for looking and learning with me! ~ Bella Mae